The management of the M1 TV channel appealed to us with the idea to send the M1 Music Awards 2018 statuette to the stratosphere on the occasion of the awarding of cultural and TV figures on November 15, 2018 #pershakosmichnamisiya.


PURPOSE OF THE PROMOTION

About 250 thousand people watched the “The first M1 space mission”. M1, ICTV TV channels and a number of Ukrainian media resources told about the launch in their stories.

During the M1 broadcast, 10 tickets were drawn for the M1 Music Awards 2018 concert for those who guess the height to which the balloon will rise.

The HAB rose by 27 kilometers (this is 3 times higher than civilian aircraft fly), flying 82 kilometers from takeoff to landing. The mission was successfully completed, and 10 luckies attended the concert.

This launch was special for several reasons:

1.The entire country had the opportunity to observe the preparation process and flight of the M1 HAB to and from outer space.

2. This is the first time we’ve worked with television.

Due to the short time frame, we had no more than 3 weeks. During this time, we, together with experts from the FabLab laboratory, created a design that delivered the M1 Music Awards statuette to the stratosphere.

Ultra-precise 3D printing, state-of-the-art materials, hollow and lightweight parts made it possible to create a suitable launch base. 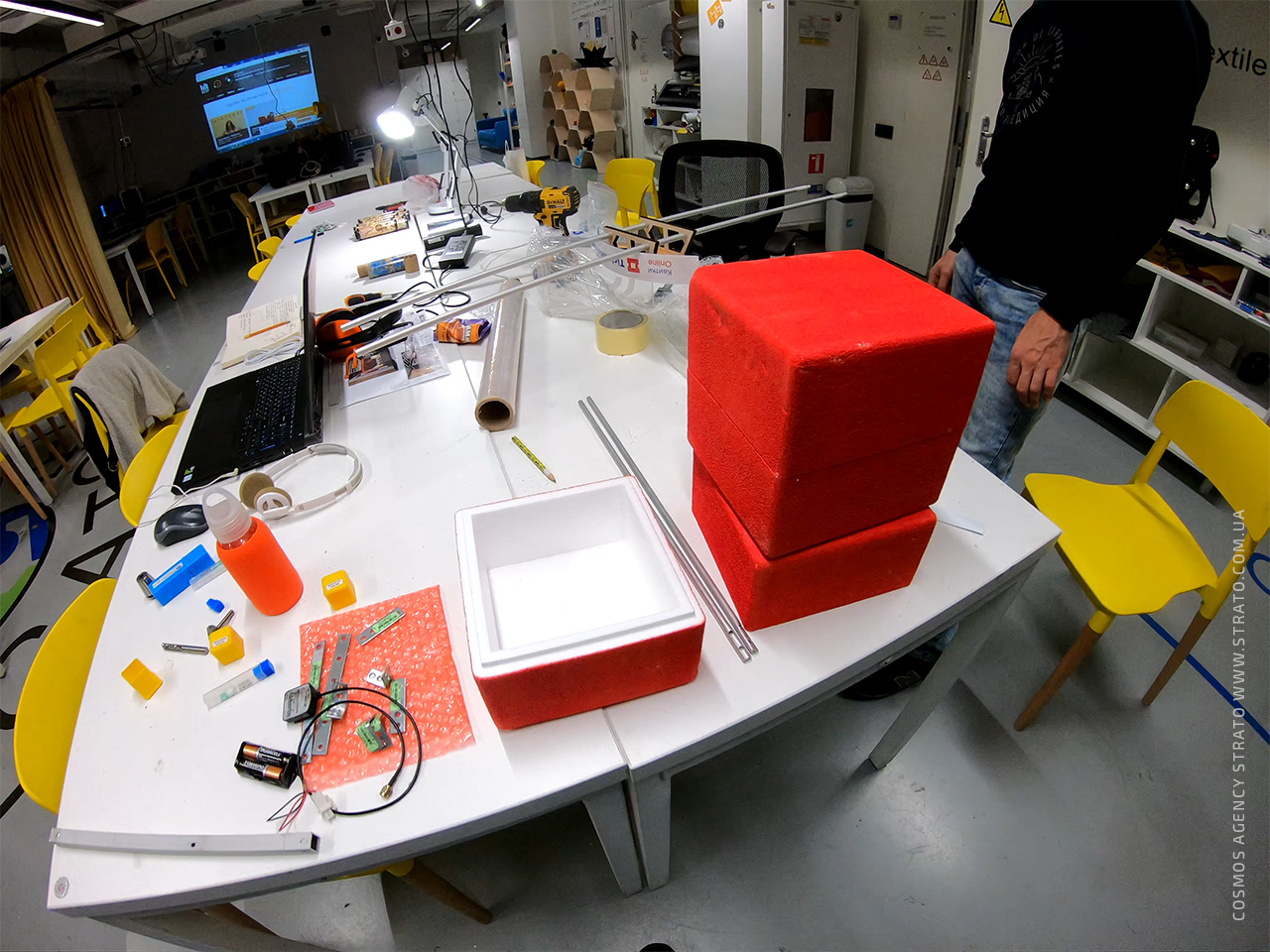 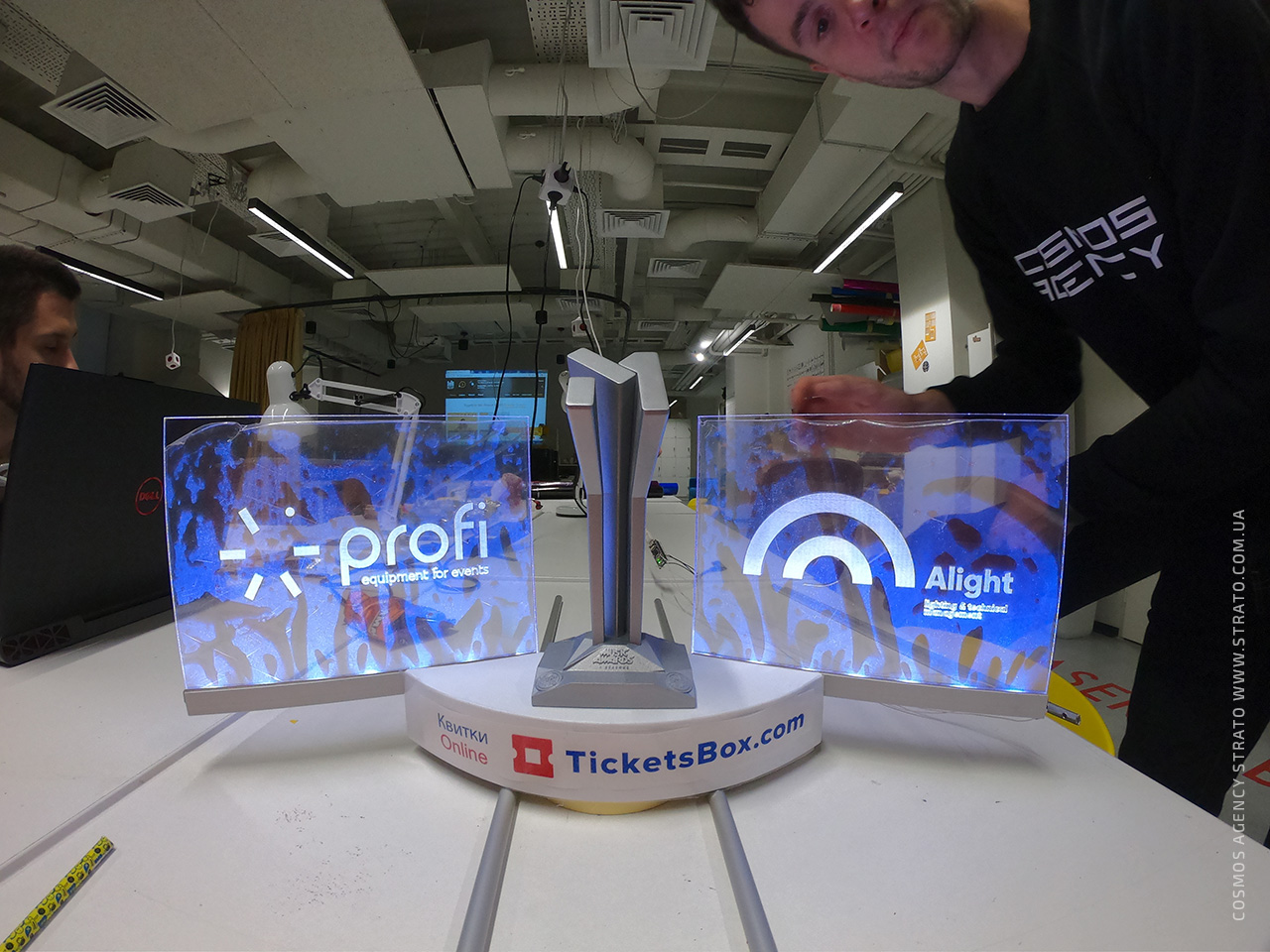 Acrylic blocks with the logos of the companies “Alight” and “PROFI” engraved on them looked spectacular in the frame, but due to their size and placement, they radically worsened their aerodynamic characteristics.

The wind speed in some layers of the atmosphere reaches 180-200 km / h, regular flights use such air flows to their advantage: a favourite wind “picks up” the aircraft, allowing you to save on fuel.

On the HAB, these flows have a negative effect, twisting and swinging the structure.

“The wind was strong, so strong that the launch had to be postponed to the next day“

As we expected, on the launch day, the wind was strong, so strong that the flight had to be postponed to November 15.

On the one hand, this coincided with the presentation of statuettes to cultural and TV figures, on the other hand, we did not have a spare day and the right to make mistakes.

The flight should go according to the ideal script. The launch was broadcast on the M1 TV channel in Live mode and on the facebook page with 95,600+ subscribers.

Ukrainian pop stars were invited to the M1 studio, and a central control room was organized in the channel’s control room. Everyone was looking forward for launch. 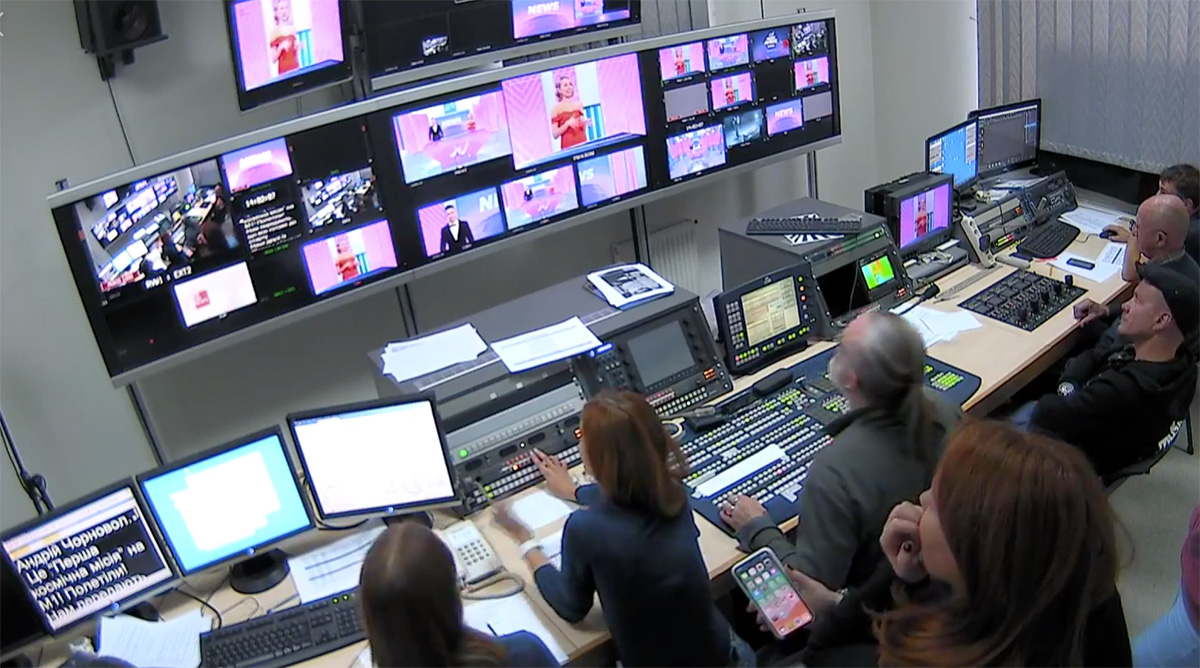 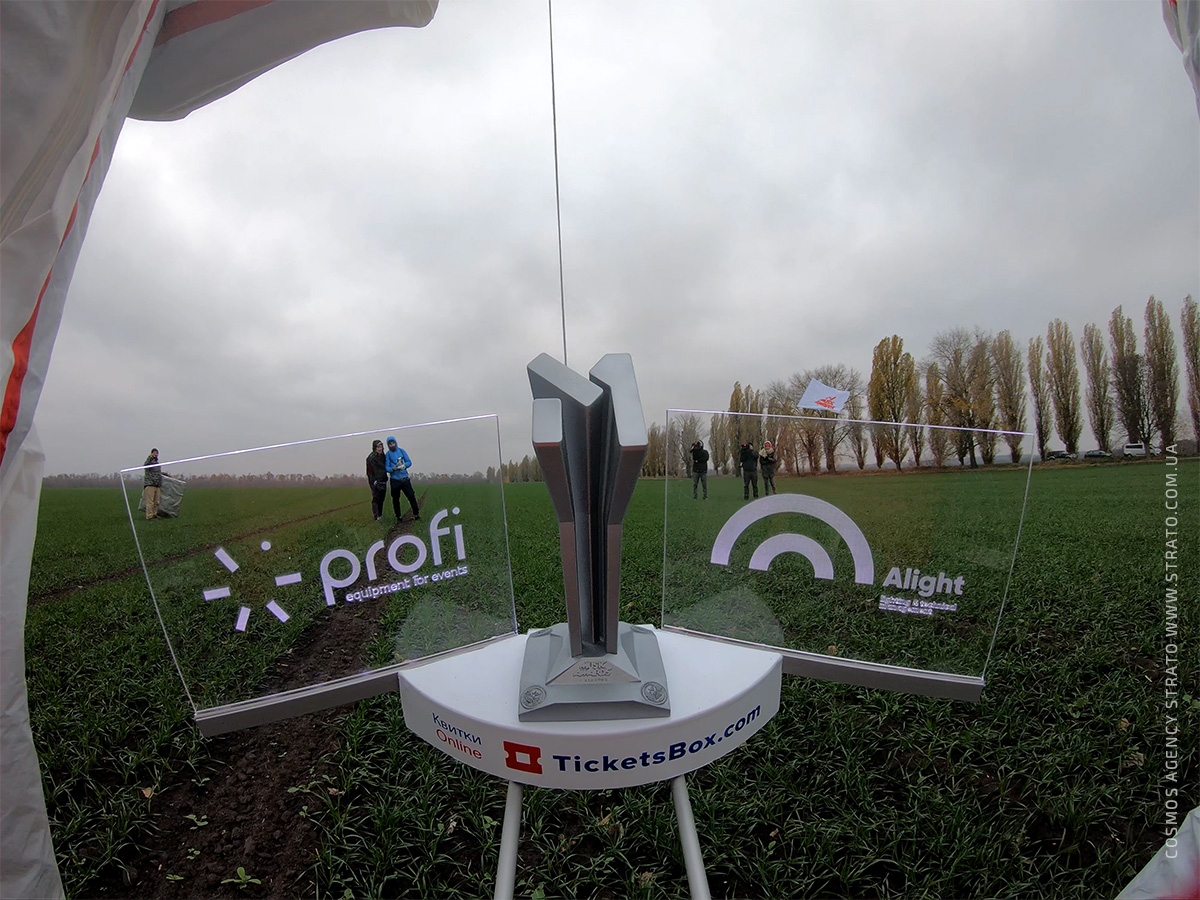 Meanwhile, 250 km from Kyiv, the Strato team and the M1 production team, who seemed to be a thousand percent ready, faced new difficulties.

The weather, like the day before, left much to be desired. The wind mercilessly fluttered the aerostatic balloon shell, pressing 40 liters of helium enclosed in latex to the ground, and gray clouds promised to explode with rain or snow.

«The rise rate was close to 5 meters per second despite the strong crosswind. »

After waiting for the wind to subside, we made the final approval of the launch with the Ukraerocenter and the Air Defense Forces of Ukraine, and after receiving a positive response, we launched the HAB.

Despite the strong crosswind, the rise rate was the planned 5 m/s. A minute after launch, the balloon dived into the clouds, and after a while, the onboard cameras showed a white haze, blue sky and bright rays of the sun – the first layer of clouds was passed. 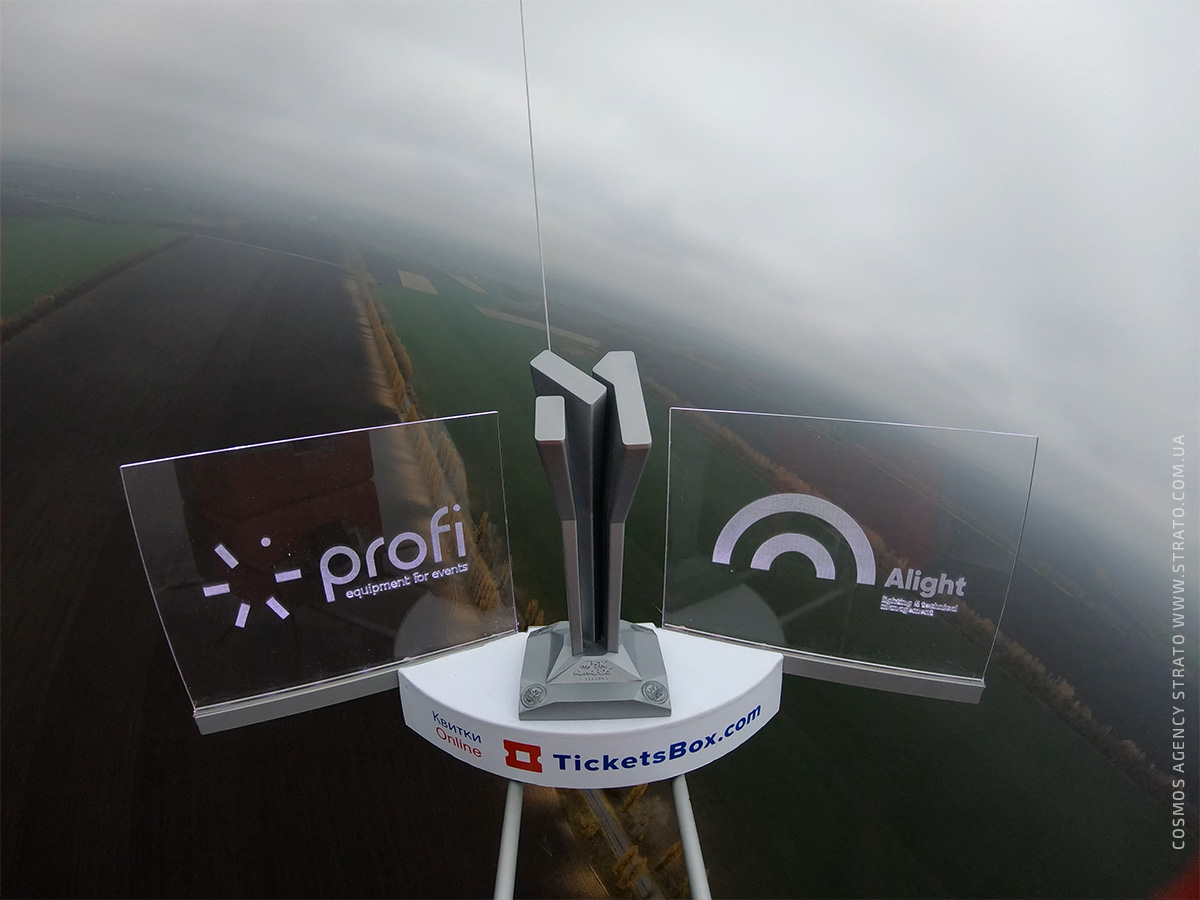 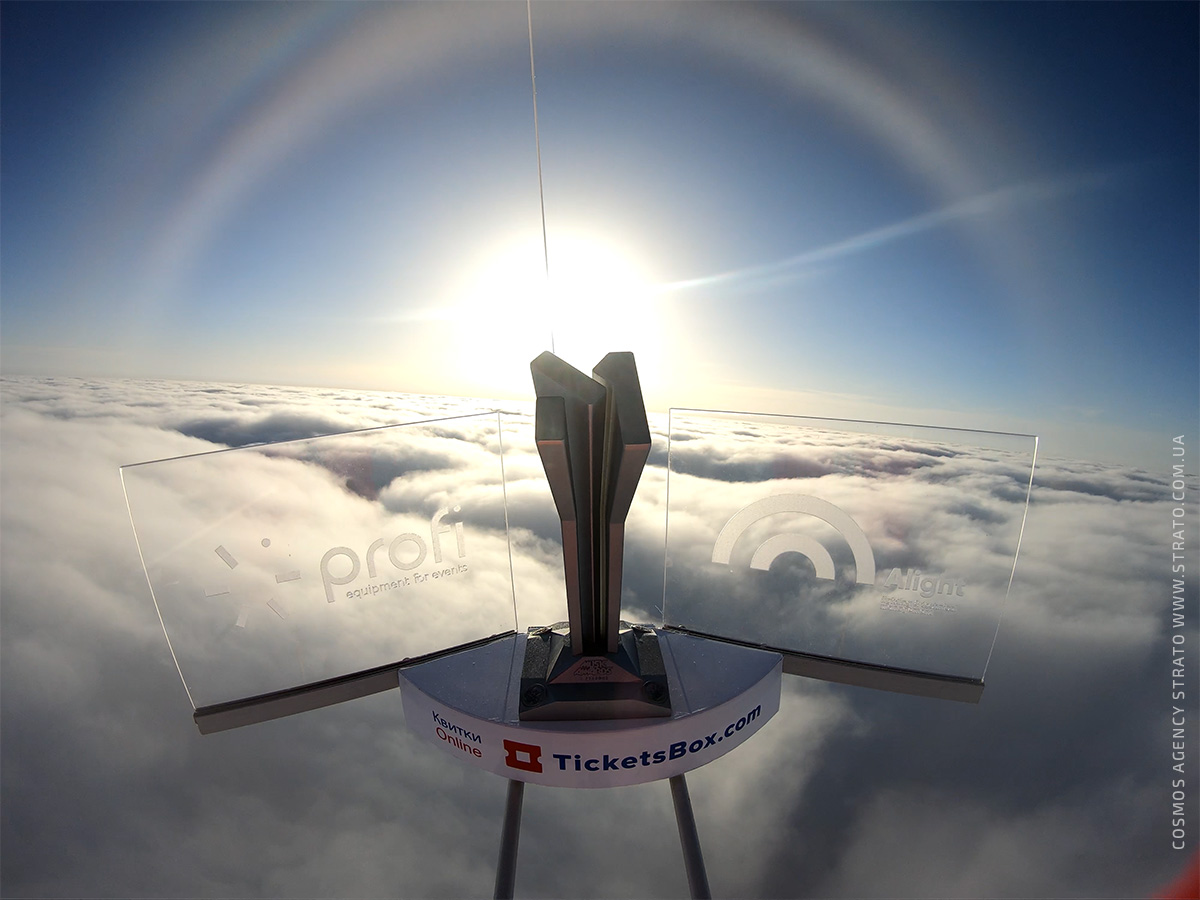 After installing the antenna on the roof of the car and wasting no time, we headed south.

Tracking and detecting the landing site are the most difficult stages of launching. The HAB regularly transmitted its telemetry, and we saw how, where, and how fast it was moving. The onboard cameras broadcast the image smoothly.

Our team drove directly under the HAB until a strong wind flow at an altitude of 8-9 km began to carry it forward at a speed of 147 km / h, we gradually standed behind. The acrylic blocks acted like sails: lifting and unwinding the structure from gusts of wind.

Communication with the probe became intermittent, and from time to time we received empty messages from the onboard radio Beacon.

We had an hour and a half of flight time behind us, and we could only hope that all the systems were working properly and that the second beacon would transmit the exact coordinates of the landing site.

According to the indicators, we realized that there was a rupture of the Shell and now the HAB is diving down from a height of 27 km.

With downward flight, the air density increases and the time of the onboard parachute comes, which gradually slows down the probe to 4-5 m / s.

Our rule: install several beacons and a couple of cameras in the box, this minimizes the possibility of losing communication and flight data. The main task is to find HABs.

After 2 hours, the probe landed and the broadcast stopped, but the Cosmos Agency Strato team and the M1 production team follow the route to the landing site. 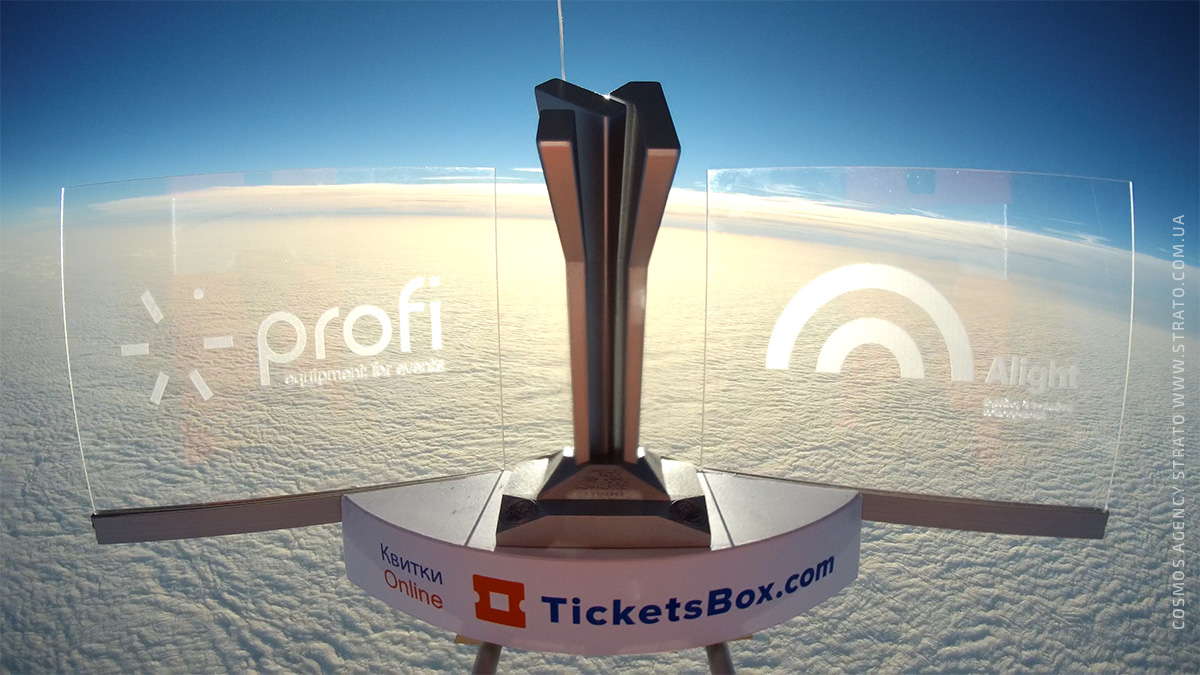 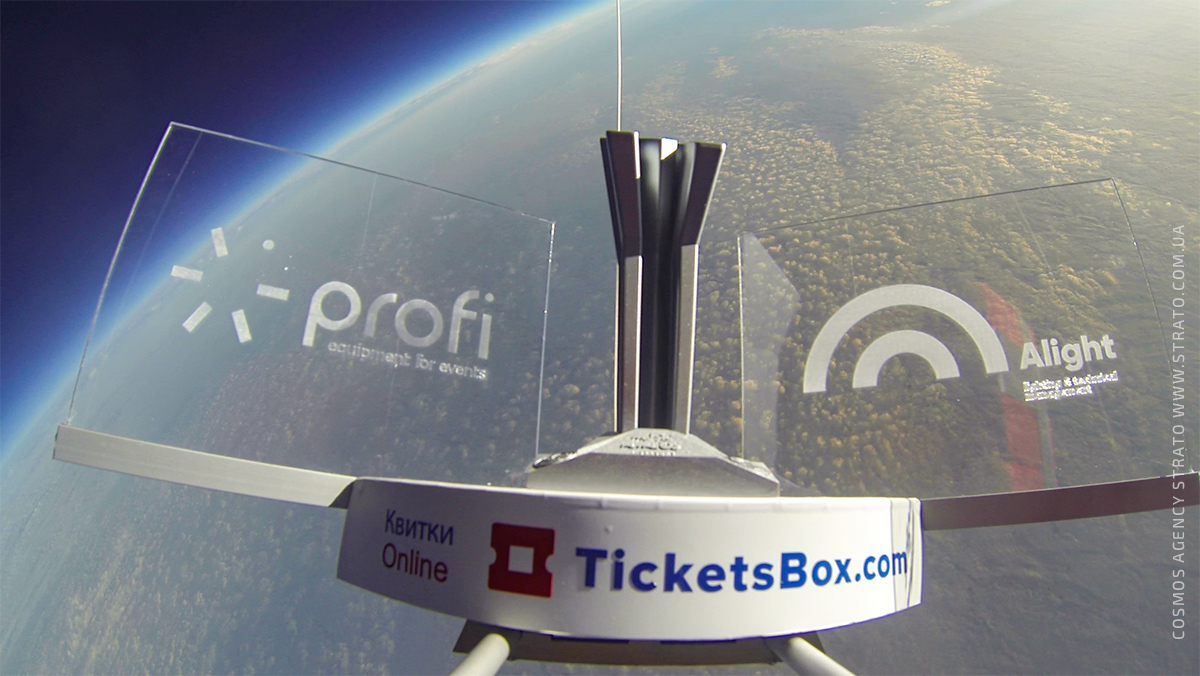 «The HAB landed a few kilometers from the planned landing area» 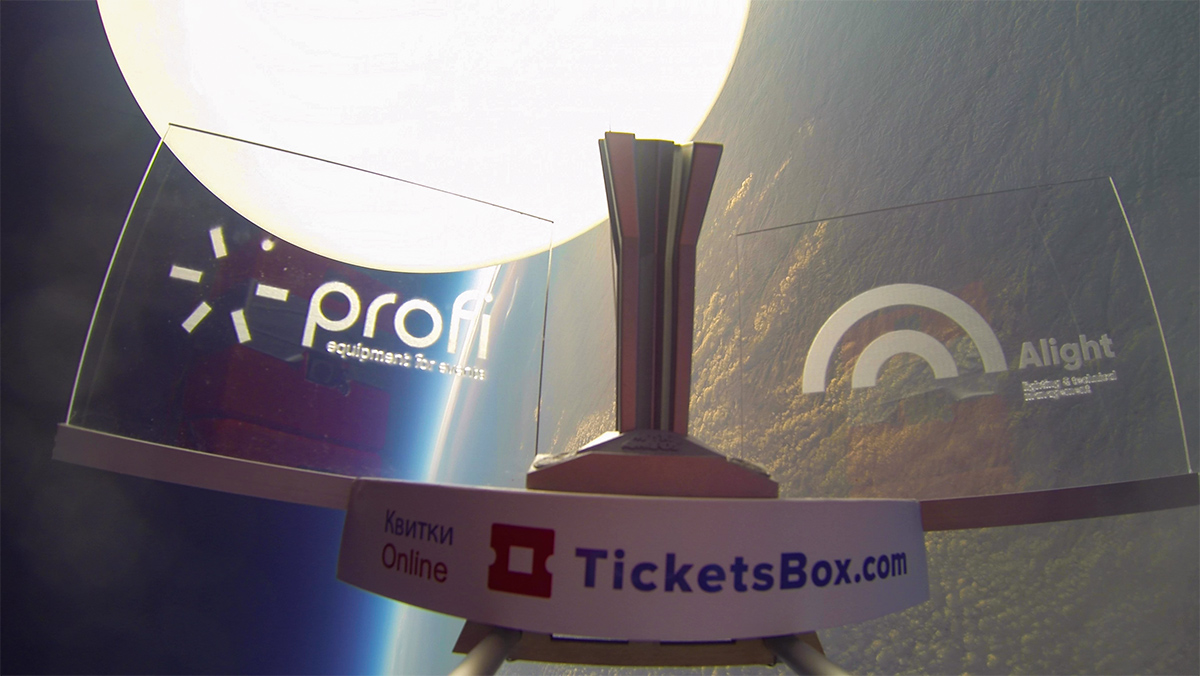 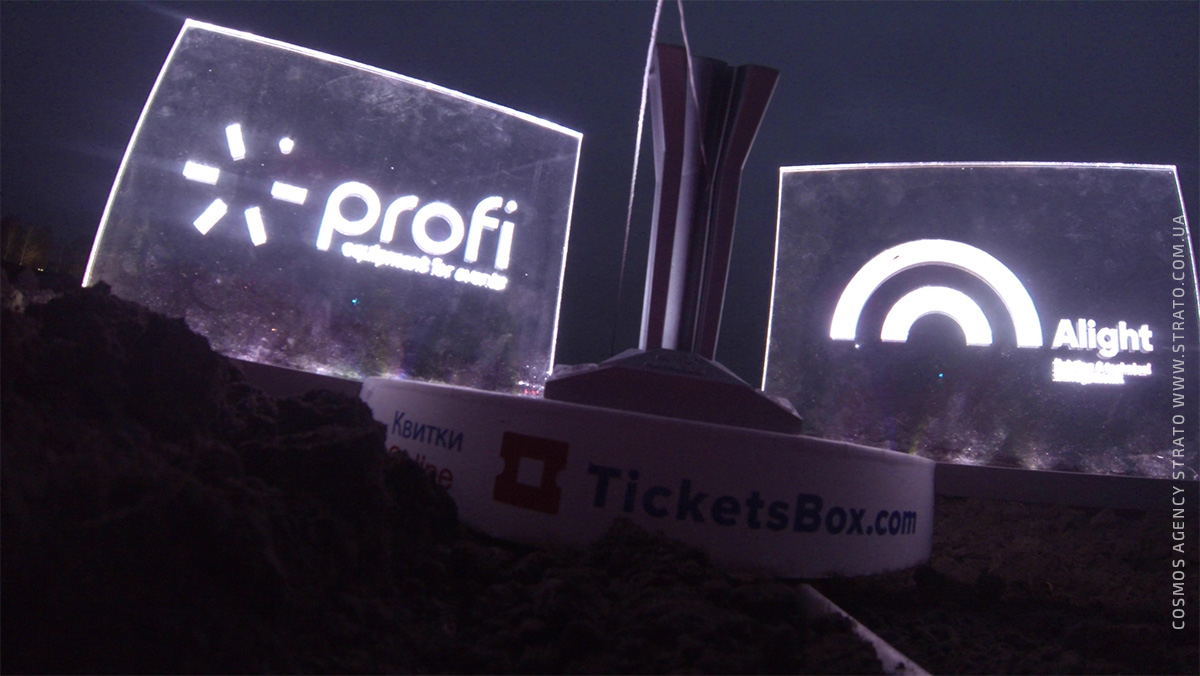 The parachute successfully opened and this guaranteed the softest possible landing. Judging by the picture from the onboard cameras, the HAB landed in the middle of a field, a few kilometers from the planned landing area – this is a good result, much better than in a water reservoir or in a closed area.

Night had already fallen by the time we arrived. The darkness, fields and one narrow country road that we arrived on were all around.

Thanks to the illumination of acrylic blocks, our probe glowed like a lighthouse in the middle of an endless sea. We waited for the production team and moved in the direction of the HAB.

To finish filming the final scene of finding the HAB, the channel’s production team went back to Kyiv, we turned off the onboard cameras, suited up and joined them.

After flying 82 kilometers from the launch site, the M1 Music Awards HAB landed in another region, overtaking a cyclone that was moving from the West, sometimes reaching speeds of up to 147 km / h.

The launch was more than successful, about 250,000 people across Ukraine watched the flight in real time, and many celebrities visited the M1 studio, of which I would especially like to mention Oleh Skrypka (frontman of the BB Group). 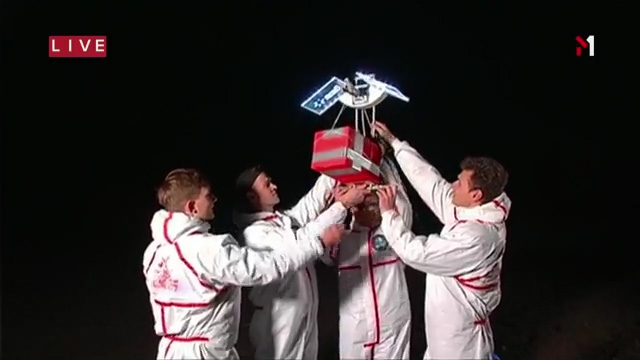 “Leonid Kadeniuk was the first and only cosmonaut of independent Ukraine. While performing the NASA STS-87 mission, he took the audio disk of the then young Ukrainian group “BB” with him to the International Space Station” 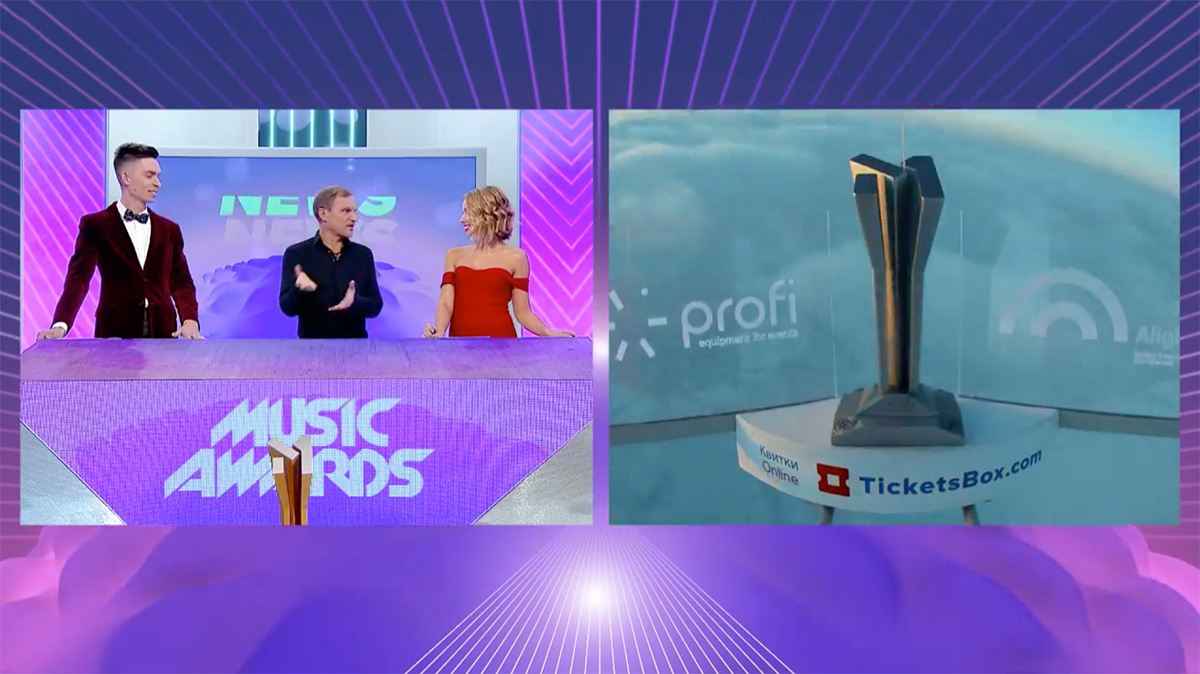 Especially because back in 1997, Leonid Kadeniuk, the first and only cosmonaut of independent Ukraine, taking part in the NASA STS-87 mission, took the disk of the then young Ukrainian BB group with him to the International Space Station.

We dedicated one of the previous launches to the memory of Leonid Kadeniuk, but unfortunately the flight video has not been kept safe. Only footage of the launch process taken by Fundamental Production remained. However, we are going to repeat this memorable launch. 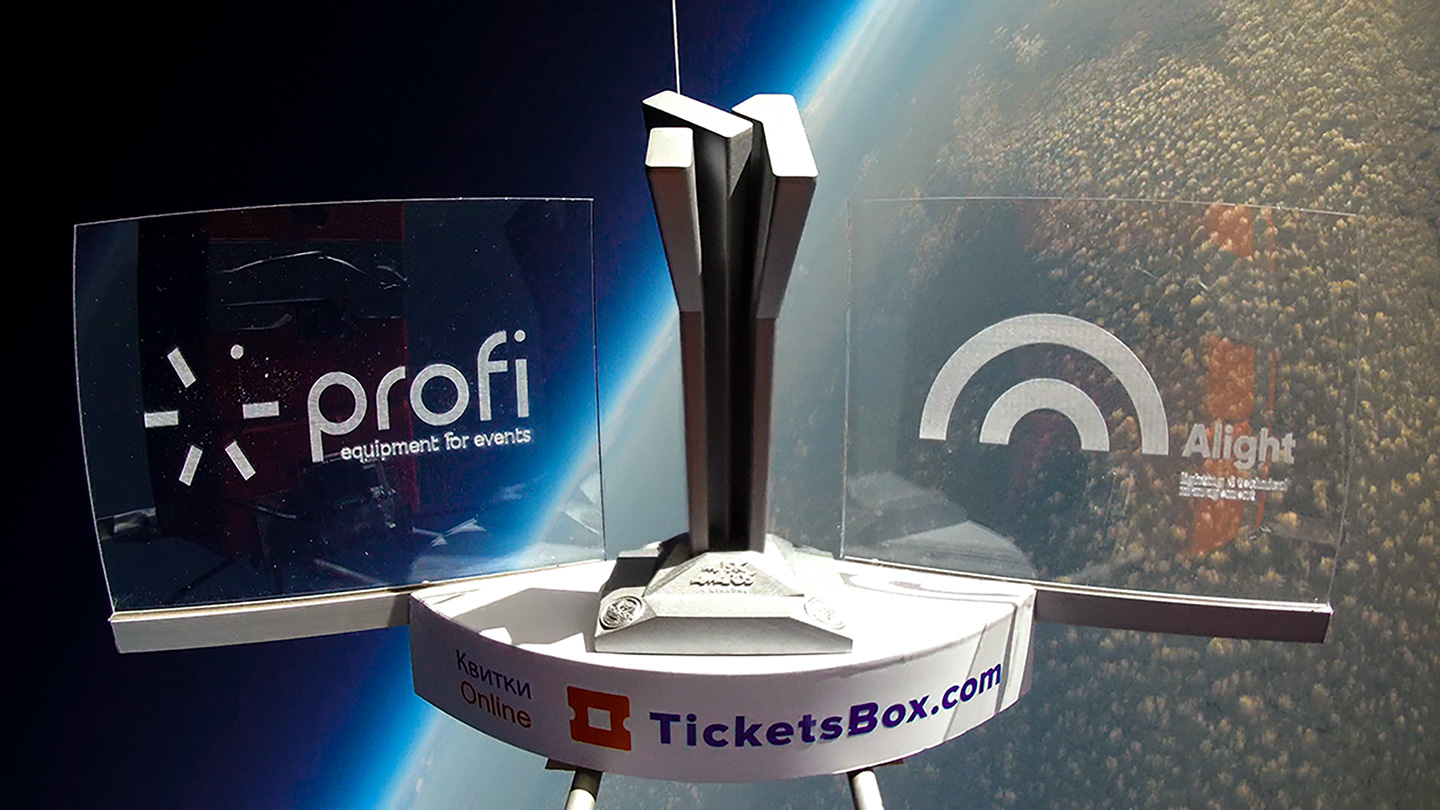 About 250 thousand people watched the “The first M1 space mission”. ICTV channel told about the launch in its story. During the broadcast, the M1 TV channel drawn off 10 tickets to the M1 Music Awards 2018 concert for those who guessed right the height to which the balloon would rise.

The HAB covered more than 27 kilometers (which is 3 times higher than civilian aircraft fly), flying 82 kilometers from takeoff to landing. The mission was successfully completed, 10 luckies attended the concert, and we are waiting for the second M1 space mission!

We express our gratitude to the management and production team of the M1 TV channel, as well as the state company Ukraerocenter for assistance in implementing this launch. 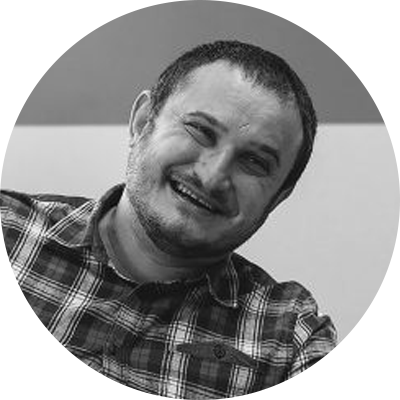 «Thank you!! everything was cool»

Nuka is a startup created by three Ukrainian students, engaged in the production of the eternal stationery. A pen that writes with metal oxide and a notebook made of polymer paper conquered the stratosphere and returned back to Earth, reaching an altitude of 31 km.

Our mission is to make near space accessible to all comers. In addition, among the priority tasks, we see the development of the aerospace sector in Ukraine and abroad.